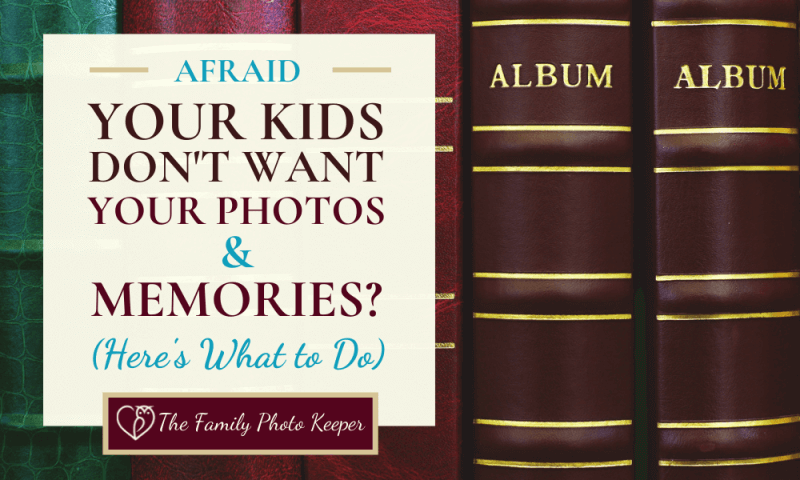 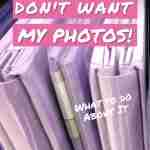 Your memories – photos and heirlooms – are important to you. But your grown children may have told you they don’t want them. Read on to find out why and what to do about it.

This post may contain affiliate links, which means that I may receive a commission if you make a purchase using these links. As an Amazon Associate, I earn from qualifying purchases.

Or maybe you just intuit that they don’t, even if the conversation never actually happened.

I’ve heard these words from many of my clients, and probably most painfully from those who have invested years of time and money into scrapbooking their family memories. I’ve also heard them from people with boxes of unorganized photo memories, and it makes them feel like “why bother?”

As a family photo keeper, you value your memories and photos so much because they feature the people, events, and places that you love. And you know in your heart your kids love them, too, so their response seems unfathomable. It may even make you feel like giving up.

I think we all dream of a world where our cherished memories are cherished by future generations. And I believe it’s possible. Read on and I’ll tell you why I believe that and how to make it happen.

I Don’t Believe Your Kids Don’t Want Your Memories

It’s the lament of our generation, that our kids don’t want our stuff. Google shows over 50 results for that search, including in such esteemed publications as Forbes and Psychology Today. But I don’t believe it totally, and here’s why.

Boomers – those of us born between 1946 and 1964 – often had parents who grew up with very little. They worked hard and they saved money. They demonstrated success in life by what they could buy – homes, furniture, cars, and so on. There was pride in ownership.

Although we grew up with these values of hard work and delayed gratification, we – women especially – often had more education and career aspirations than previous generations. And our children grew up in very different families than we did. Society as a whole changed a lot between our parents’ and our own generation, and then again between our own and our children’s generation.

We generally see no reason not to accept our parent’s heirlooms and add them to our own collections. But our children tend to be minimalists and to define success differently than previous generations. And it can be hard not to take their rejection of our “stuff” personally. It may even inspire laziness or inaction on our parts – why should we bother if they don’t want it?

It is, however, simply how lifestyles and values have changed between generations. But one thing hasn’t changed, and that’s because there is a biological basis for it.

The Science of Nostalgia

According to Google, nostalgia is defined as “a sentimental longing or wistful affection for the past, typically for a period or place with happy personal associations.” For most of human history, it was considered a psychopathological disorder.

Creative Memories jumpstarted the modern scrapbooking movement in 1987 and capitalized on family nostalgia. Yet many people still looked down on it.

No controlled studies were done on the effects of nostalgia until after 1999 when social psychologist Constantine Sedikides admitted to another psychologist friend that he had been feeling nostalgic for the location of his former job in another country. His friend diagnosed him as depressed. He disagreed and was inspired to pioneer the scientific study of nostalgia.

What We Now Know About Nostalgia

Over the past two decades much has been learned about nostalgia.

First, it is universally experienced and is mostly positive. The topics are also universal – reminiscences about friends and family members, holidays, weddings, songs, sunsets, vacations, etc.

Second, it can affect our bodies and brains in ways that can be measured. It can be seen on brain scans, and it can make our bodies physically warmer, which may have been a survival mechanism. It has also been shown to affect decision making.

Third, and most important to our discussion, is that nostalgia changes as we grow and age.

So here’s what’s happening: We Boomers are experiencing high nostalgia while our grown children are experiencing low nostalgia. Combine this fact with the generational differences about ownership, and we may be left feeling hopeless. But there is hope. Read on.

Your Memories and Your Stuff are Not the Same

The word “stuff,” especially as bandied about the internet in all these articles, actually feels derogatory. It is important to tease out the important words here, and I think they are “memories” and “history.”

When our grown children reject our physical mementos, they are not necessarily rejecting the memories and the history. They may not feel the pull of those yet, as their nostalgia levels are lower than ours. But I believe that they will, as they in turn, age. And it is up to us to make sure that those memories and history are not lost nor rejected before they realize the value.

What to Do About the “Stuff Problem”

The most important part of the process is communication with your children. Don’t be afraid to ask what they want and don’t want, especially when it comes to non-photo heirlooms. It’s better to know now and prepare than to overwhelm them after your passing. Preparing now is an act of love.

Consider what you can give away and/or donate. If there are memories and history associated with particular objects, take photos and write the stories down. Remember, the objects are triggers, not the actual memory itself.

And yes, I did tell you to take photos and write stories down. I do believe that your children will value these as they age. However, they may not value them in physical form. No matter your current relationship with technology and computers, digitizing your memories and ensuring they are safeguarded against loss is probably the most important thing you can do. This will ensure that your memories and family history are passed on to future generations.

Forever is my favorite digital storage platform. They guarantee the the longevity of your memories and stories for your lifetime plus 100 years. They offer digitization of older media as well as scrapbooks and photo albums. You can also hire a professional photo manager like me to help you with the process, whether you want to do it yourself or hand the whole job over (or something in between).

Decide to take action. Decide to start. Download my free “Getting Started Checklist.” I’ll walk you through those first steps and then continue to support you throughout the process with my weekly newsletter and my Family Photo Keeper Community. You can and should ensure that your memories and family history are in the best possible shape to benefit future generations. 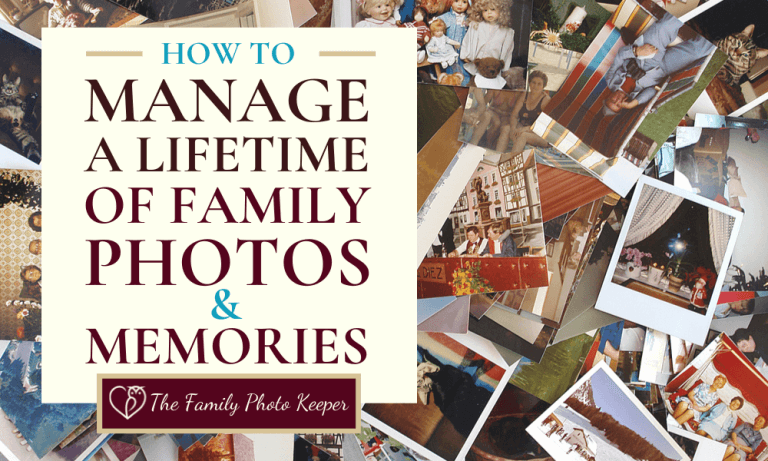 Learn how to organize 30 years of photos even if you don’t have the time and/or you don’t know where to start. 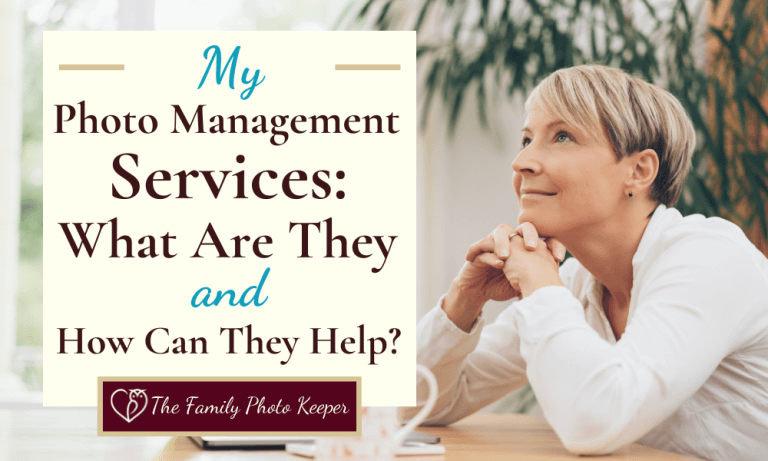 Photo Management Services are fairly new, and it can be confusing to know exactly what you might need. This article can help you decide which of my services are right for you. 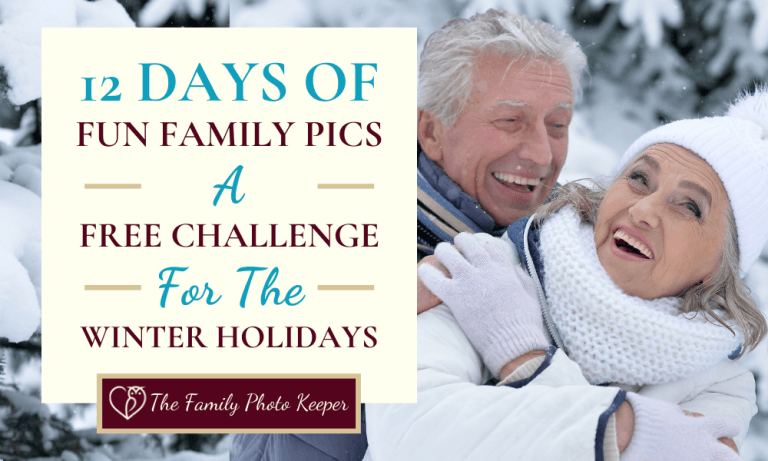 I’ve created a free challenge called 12 Days of Fun Family Pics that will bring more joy and remembrance to this season, no matter what your family looks like or what holidays you do or don’t celebrate. 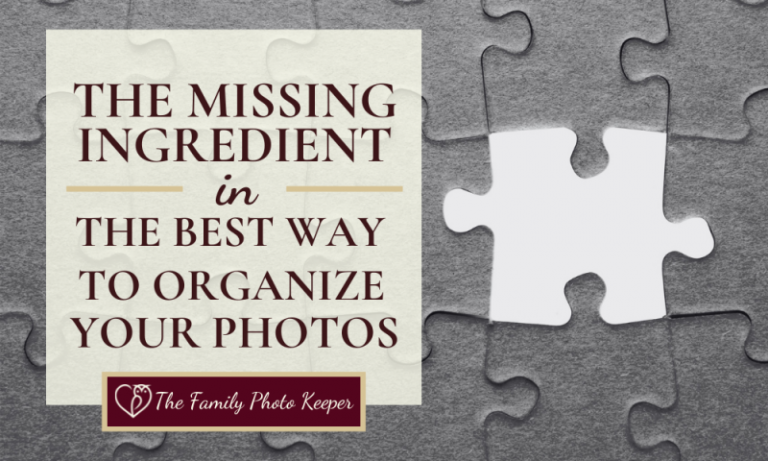 There are a bazillion articles on the internet that tell you the best way to organize photos.  But have you done it yet? If not, it’s likely because you are missing an important ingredient. 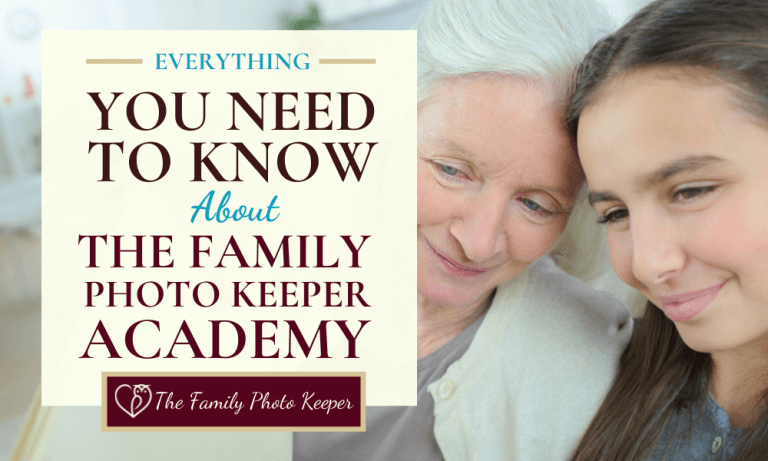 The Family Photo Keeper Academy was created to teach you all the aspects of photo organizing. In the Academy, I teach you how to organize and preserve all your photos so you can celebrate and share your memories. 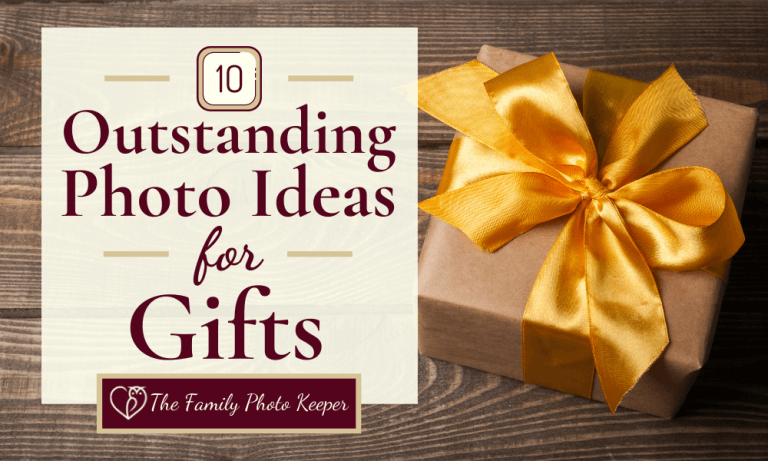 If you need some photo ideas for gifts, look no further. These selected gifts are premium quality and will show your recipient your care and affection.

I’m a former teacher and a family photo keeper who believes that one of the best ways to strengthen families is to share photos and stories across generations.